Everyone has a story to tell. Some of you reading this have overcome so much in your lives. God has been with us all along, and our story has the power to destroy the work of the accuser of the brethren, Satan. When we tell others what God has done for us, the same energy and grace God gave us to overcome those situations will be available to the people hearing the story. When we talk about God’s feats in our past, it makes them available to us in the present. Our testimonies, our stories, are the key to opening someone else’s prison doors to set them free. We should never grow tired of the story God has given us. Look at what David’s story did for him.

Now when the words which David spoke were heard, they reported them to Saul; and he sent for him. Then David said to Saul, “Let no man’s heart fail because of him; your servant will go and fight with this Philistine.” And Saul said to David, “You are not able to go against this Philistine to fight with him; for you are a youth, and he a man of war from his youth.” But David said to Saul, “Your servant used to keep his father’s sheep, and when a lion or a bear came and took a lamb out of the flock, I went out after it and struck it, and delivered the lamb from its mouth; and when it arose against me, I caught it by its beard, and struck and killed it. Your servant has killed both lion and bear; and this uncircumcised Philistine will be like one of them, seeing he has defied the armies of the living God.” Moreover David said, “The Lord, who delivered me from the paw of the lion and from the paw of the bear, He will deliver me from the hand of this Philistine.” And Saul said to David, “Go, and the Lord be with you!” (1 Samuel 17:31-37)

David was offered Saul’s weapons and armor, but it didn’t fit him. He had to change. He had to go with what he had in his hands and in his heart. Those were the things that made him stand out. His story of overcoming the lion and bear that was the source of his power. The secret victory he won in private was the prophecy of his public success of tomorrow. David’s triumph over the lion and the bear allowed him to believe that he would defeat Goliath, with God’s continued help. Our past victories spring us forward into tomorrow’s successes.

I want to repeat that private victories lead to public victories. When we conquer the wild beasts of our private life, we will overcome the public giants threatening our families, our friends, our culture. David remembered what God had done for him in the fields, and it took him into the victory on the battlefield. Our successes are not about us, they are about others. We win in private, so we can help others succeed in public. This one teenage boy, who remembered his testimony, won a great victory that day.

In the book of John, we see a five-time divorced woman lead an entire town in Samaria to Jesus because of her story.

The woman then left her waterpot, went her way into the city, and said to the men, “Come, see a Man who told me all things that I ever did. Could this be the Christ?” Then they went out of the city and came to Him. And many of the Samaritans of that city believed in Him because of the word of the woman who testified, “He told me all that I ever did.” So when the Samaritans had come to Him, they urged Him to stay with them; and He stayed there two days. And many more believed because of His own word (John 4:28-30, 39-41).

Do not disregard the story of your life. It has the power to impact and change the course of generations behind us. Your story can show them who God is and lead them into a relationship Jesus Christ.

We will not hide them from their children,

Telling to the generation to come the praises of the Lord,

And His strength and His wonderful works that He has done.

For He established a testimony in Jacob,

And appointed a law in Israel,

Which He commanded our fathers,

That they should make them known to their children;

The children who would be born,

That they may arise and declare them to their children,

That they may set their hope in God,

And not forget the works of God,

But keep His commandments;

A stubborn and rebellious generation,

A generation that did not set its heart aright,

And whose spirit was not faithful to God. 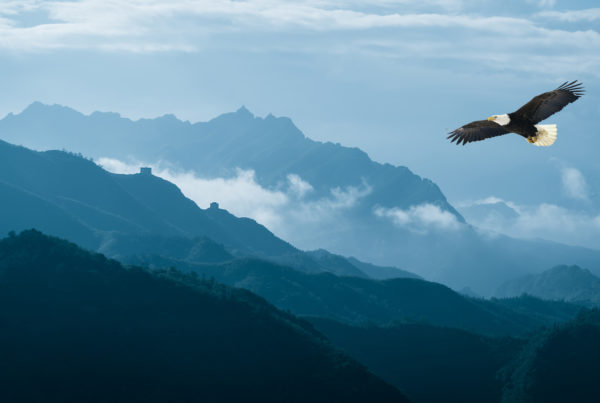 Prophetic Vision: The Eagles are coming!